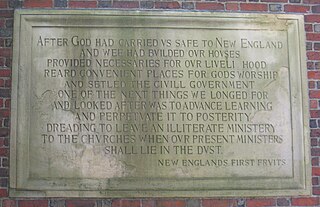 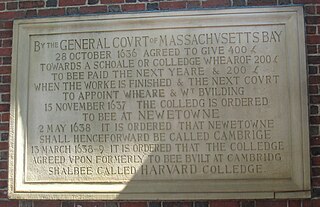 HARVARD: Its purpose was mainly to educate clergy.  “With some 17,000 Puritans migrating to New England by 1636, Harvard was founded in anticipation of the need for training clergy for the new commonwealth, a “church in the wilderness” (Wikipedia)

After God had carried us safe to New-England, and wee had builded our houses, provided necessaries for our livelihood, rear’d convenient places for Gods worship, and setled the Civill Government: One of the next things we longed for, and looked after was to advance Learning and perpetuate it to Posterity; dreading to leave an illiterate Ministery to the Churches, when our present Ministers shall lie in the Dust. And as we were thinking and consulting how to effect this great work, it pleased God to stir up the heart of one Mr. Harvard (a godly gentleman and a lover of learning; then living amongst us) to give one-half of his estate (it being in all about £1,700) towards the erecting of a Colledge, and all his library. After him, another gave £300; others after them cast in more; and the public hand of the State added the rest. The Colledge was by common consent appointed to be at Cambridge (a place very pleasant and accommodate), and is called (according to the name of the first founder) Harvard Colledge.“New England’s First Fruits” (1643)

Harvard’s “Rules and Precepts” adopted in 1646 included the following essentials: “Every one shall consider the main end of his life and studies to know God and Jesus Christ which is eternal life. Seeing the Lord giveth wisdom, every one shall seriously by prayer in secret seek wisdom of Him. Every one shall so exercise himself in reading the Scriptures twice a day that they be ready to give an account of their proficiency therein, both in theoretical observations of languages and logic, and in practical and spiritual truths….”

WILLIAN AND MARY, 1693:  The Church of England established the College of William and Mary, near today’s colonial Williamsburg.

Subsequent colleges and universities–Yale, Princeton, Brown, Rutgers, Dartmouth–grew out of the Great Awakening, the series of religious revivals that swept the English colonies in America mainly between about 1720 and the ’40s.

YALE, 1701:   Chartered by Connecticut Colony, the “Collegiate School” was established by clergy in Saybrook Colony to educate Congregational ministers. In 1700, ten Congregationalist ministers–Samuel Andrew, Thomas Buckingham, Israel Chauncy, Samuel Mather, James Noyes, James Pierpont, Abraham Pierson, Noadiah Russell, Joseph Webb, and Timothy Woodbridge–all of whom graduated from Harvard University, stood around a table and donated their books so that a new college could be started in order to train future ministers.

A charter was granted for a school “wherein Youth may be instructed in the Arts and Sciences (and) through the blessing of Almighty God may be fitted for Publick employment both in Church and Civil State.” The school officially became Yale College in 1718.

PRINCETON, 1746: Princeton was originally Presbyterian.  Three of the four originators of Princeton were graduates of Yale: Jonathan Dickinson, pastor at Elizabethtown; Aaron Burr, pastor at Newark; John Pierson, pastor at Woodbridge. The fourth, Ebenezer Pemberton, pastor of the Presbyterian Church in New York, was a graduate of Harvard…

“Though our great Intention was to erect a seminary for educating Ministers of the Gospel,” one of the founders later wrote in a letter to another clergyman, “yet we hope it will be useful in other learned professions — Ornaments of the State as Well as the Church. Therefore we propose to make the plan of Education as extensive as our Circumstances will admit.” The College, furthermore, was not to be solely for Presbyterians: “The most effectual Care is taken in our Charter to secure the Rights of Conscience,” the Trustee wrote in this same letter. “Persons of all persuasions are to have free access to the Honours & Privileges of the College, while they behave themselves with Sobriety and Virtue.”

Princeton retained its evangelical vigor longer than any other Ivy League school. In fact, Princeton’s presidents were evangelical until at least the turn of the Twentieth Century, as also many of the faculty. Princeton’s crest still says “Dei sub numine viget,” which is Latin for “Under God she flourishes.”

COLUMBIA, 1754: The first president of New York’s Columbia University, first known as “King’s College,” at one time served as a missionary to America under the English-based “Society for the Propagation of the Gospel in Foreign Parts.”

BROWN, 1764: Brown University originated with the Baptist churches scattered on the Atlantic seaboard.

RUTGERS, 1766: Dutch Reformed revivalists founded Queen’s College (later Rutgers University) in New Jersey. The original purpose of Queen’s College, was to “educate the youth in language, liberal, the divinity, and useful arts and sciences” and for the training of future ministers for the Dutch Reformed Church.

DARTMOUTH, 1769: A strong missionary thrust launched this new school in New Hampshire.  It was founded by Eleazar Wheelock, a Congregational minister from Columbia, Connecticut, who had sought to establish a school to train Native Americans as Christian missionaries. Its royal charter, signed by King George of England, specified the school’s intent to reach the Indian tribes, and to educate and Christianize English youth as well.

With the exception of the University of Pennsylvania, every collegiate institution founded in the colonies prior to the Revolutionary War was established by some branch of the Christian Church.

UNIVERSITY OF PENNSYLVANIA, 1755: Even at UPenn, however, an evangelist played a prominent part. When Philadelphia churches denied revivalist George Whitefield access to their pulpits, forcing him to preach in the open, some of Whitefield’s admirers, among them Benjamin Franklin, decided to erect a building to accommodate the great crowds that wanted to hear him. The structure they built became the first building of what is now the University of Pennsylvania, and a statue of Whitefield stands prominently on that campus today.

How Christians started the Ivy League

1 Response to Christian bedrock of our Ivy League Colleges